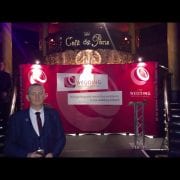 A fabulous eveing at The Wedding Industry Awards 2017 in London, at the Cafe De Paris. Whilst I didnt win the National Award, I won the Midlands Region which is West Mids, Staffs, Warks, Worcs and Shrops. So I am a very proud boy, and thank you to everyone that the took the time to vote. The night was hosted by Roger Black who was a great host! He gave a very inspiring talk about not being born with Natural Talent, as some of his World Champion Team mates had. However he said he had a work ethic that meant he trained harder. This gave him the platform to win.

To be involved in such an amazing night was an honour. It was definitely the proudest moment so far of my Magic Career. To be amongst so many amazing suppliers was humbling. I now have to decide whether to apply for 2018 and defend my Regional Title!! For the Verified Feedback from the Brides and Grooms who kindly voted for me please take a look here https://owenstrickland.co.uk/testimonials/

Tonight I was privileged to perform at a  small private dining party. This was at the fabulous New Hall Hotel In Sutton Coldfield. Truly one of the most exclusive venues in the Midlands, the Wardle Family had booked me for this special Family occasion.

I met the family as a surprise as they entered the drinks reception. First I performed some mix and mingle magic, which was when the photos were taken. I then went onto the meal and performed table magic between courses for the whole table. There was much laughter and surprise as I performed. The family were a delight to perform for and I very much enjoyed it.

Birmingham Magician Owen Strickland is the perfect accompaniment to an event such as this. Magic calms the nerves of the guests who sometimes have not seen each other for some time. It gives a talking point when there are those awards silences. Magic also means guests are guaranteed to have fond memories of the evening. As the photographs show, it also captures some amazing action shots for the family to treasure.Magic is also suitable for all ages. This party had a real mix of ages across the spectrum. A good magician, such as Birmingham Magician Owen Strickland, can adapt his style and presentation to include all spectators. This was the first booking of the year at New Hall. I will be back later in the year for a number of Weddings. For more photos of Birmingham Magician Owen Strickland performing at Weddings and other events, please take a look here https://owenstrickland.co.uk/magician-gallery/

My current showreel can be seen here https://youtu.be/senfjYkYyqc

Warwickshire Wedding Magician At Warwick House-The First Wedding of the Year and where better than Warwick House in Southam. A lovely sunny day for Adam and Jodie, whose parents booked me after seeing me at a friends wedding at Coombe Abbey Last Year.